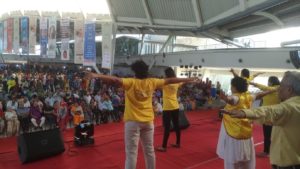 Bengaluru: During Navratri followed by Dussehra  period, Falun Dafa practitioners of various cities of India introduced beauty of this practice to people. During  festive fair, a large number of people visited Falun Dafa stalls, and many learned the exercises. Taking this opportunity, people were also informed about brutal persecution being suffered by Falun Dafa practitioners in China.

In Mumbai, local practitioners booked a stall at CIDCO exhibition arena in Vashi, Mumbai where a large Durga Pooja fair was organized.  Falun Dafa exercises were demonstrated on stage which was set up for cultural events. Despite festive hustle-bustle and noise, thousands of people keenly watched the exercise demonstration. 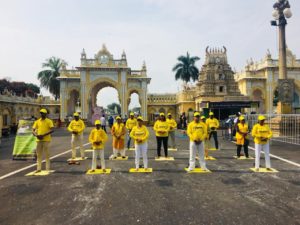 In Mysuru famous for lavish Dussehra celebrations, the practitioners performed Falun Dafa exercises outside Mysuru palace which is a famous tourist destination. Many passers-by clicked photos of practitioners and inquired about the practice. Even police personnel took information flyers and were keen on knowing more about the practice. In the evening, the exercises were demonstrated at Mysure consumer exhibition which was visited by thousands of people.

In Nagpur, practitioners demonstrated Falun Dafa exercises, distributed information flyers, and offered books for sale at a large booth at Diksha Bhoomi on the occasion of 63rd Dhamma Chakra Pravartan. Thousands of people visited the event and many expressed desire to learn the practice.

Falun Dafa (also known as Falun Gong) is an ancient spiritual practice consisting of five gentle exercises including meditation. Introduced to public in China by Master Li Hongzhi in May 1992, Falun Dafa is now being practiced by more than 100 million people in over 114 countries including India.  It has been introduced in many schools and colleges across the country. Many corporates have requested for Falun Dafa’s workshops for their executives. Many fashion models Bollywood artists are practicing Falun Dafa for stability in their hectic life.