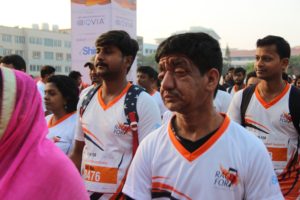 Across the world, the last day of February is commemorated as World Rare Disease Day to raise awareness of the impact that rare diseases have on the lives of patients and those who care for them. It is a day that brings together patients, families, caregivers, medical professionals,policymakers and members of the public in solidarity.

“We recently organized Race for 7 in Bangalore, Mumbai and Washington (with smaller events in Jaipur and South Carolina) to increase awareness about rare diseases in India. While the event was a great success with participation of over 5000 people across cities and countries, the effort to amplify the voice of the rare disease community must continue and the race must go on,” said Prasanna Shirol, co-founder of the Organization for Rare Diseases India (ORDI), an NGO committed to addressing the challenges faced by those living with rare diseases.

“While the global theme for Rare Disease Day is Research and we recognize the importance of research to address the many challenges of rare disease patients, it is also important that we use this day in India to draw attention to policies for rare diseases,” said Prasanna Shirol. “There is now a national policy for rare diseases that have been announced by the central government. It is very important that state governments follow suit and put in place State policies on priority so that the benefits can be passed onto patients.”

Founded in Feb 2014, ORDI is a patient-centered non-profit organization with the mission to improve the health of patients with rare diseases across India through awareness, advocacy, collaborations and information dissemination. ORDI represents the collective voice of all patients with rare diseases in India to affect government policymaking. ORDI has identified and taken on the grand challenges facing the rare diseases community in India and is committed to systematically and holistically addressing those challenges.