Only 1 in 10 people with rare diseases receive targeted treatment in India. On Rare Diseases Day, the focus must be on awareness, better R&D, and making genetic carrier screening mandatory in the country. 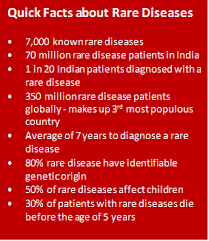 Estimates indicate that over 70 million people are affected by rare diseases in India. Despite their prevalence in a small segment of the population, they are emerging as a public health challenge in the country. Further, only 1 in 10 patients receives disease-specific treatment. On Rare Diseases Day, the need of the hour is to raise awareness on these conditions and the need for early-stage genetic screening in expectant mothers.

The health ministry recently formulated the National Policy for Rare Diseases 2020, an amended version of the earlier draft released in 2017. Although the new policy mentions treatment as being available, it is only limited to certain categories. There is a need to include other diseases and ensure that more focus is given to R&D in this area, apart from creating awareness about these diseases.

A rare disease is a health condition which has a low prevalence and affects a small number of people. The most common conditions include Haemophilia, Thalassemia, Sickle-cell Anaemia and Primary Immuno Deficiency in children, auto-immune diseases, and Lysosomal storage disorders.

Speaking about this, Ashish Dubey, COO and Co-founder, Redcliffe Life Sciences, says, “Given the prevalence of rare diseases and the fact that the research on their treatment is ongoing, it is important to ensure that every mother undergoes genetic screening at an early stage. Any genetic analysis post the birth of the baby can now be done in the fetus, in the first trimester itself. Screening for a broad range of conditions are becoming a routine aspect of prenatal care. Through Crysta we offer this facility wherein the parents-to-be can understand if the baby to be born has the likelihood of any diseases. In case of a positive diagnosis, it is possible to tailor treatment specific to the condition through what is called precision medicine. Many health-tech startups within the country are pioneering the use of precision medicine across use cases.”

Only 1 in 10 people with rare diseases receive targeted treatment in India. There is a lack of awareness about rare diseases in India which makes it imperative to come up with a comprehensive preventive strategy. Increased emphasis must be given to genetic screening programmes to prevent births of children with rare diseases and help parents take an informed decision.

Adding further, Dr Vishal Sehgal, Medical Director, Portea Medical, says, “Rare diseases are both a medical and social concern. People with these conditions not only suffer physically but also face a lot of emotional trauma. While screening is imperative in pregnant women to understand the risk factors, in case of children born with rare diseases, primary care plays an important role. Many of the diseases can be managed with replacement therapies administered for the patient’s entire life, or other supportive therapies. This is where organizations like Portea can play a supportive role in the form of rehabilitation and helping them manage their condition at home.”

According to Padma Shri Awardee, Dr K K Aggarwal, President, Heart Care Foundation of India (HCFI) and Confederation of Medical Associations of Asia and Oceania (CMAAO), “Treatment options for rare diseases are also available in the private sector and there is a need to extend funding to include support for follow-up therapy. For instance, in case of certain immune deficiency disorders that can be cured with treatment. The government should also consider amending the Insurance Act to provide cover for rare diseases and the scheme should be extended under the CGHS, PSU, ESI etc.”

Most diagnostics and treatment regimens available globally for rare diseases are now there in India as well. There are diagnostic tests available today that make use of the latest technology and reporting to give reliable data. The use of precision medicine and the data-pool gathered through such an approach will go a long way in solving the issue of rare diseases in our country. However, these facilities are expensive and usually available only in a few major cities. This is compounded by a lack of medical insurance schemes and government policies to support patients with rare diseases.

Under the draft policy released recently, however, the government proposed to fund one-time treatment cost to the tune of RS 15 lakh for certain treatable rare diseases. This is provided the patient is eligible under its flagship health insurance scheme, Ayushman Bharat’s Pradhan Mantri Jan Arogya Yojana.Researchers recently concluded a six-month pilot project of genome sequencing of Indians, which means the solution to the problem of rare diseases may just be around the corner.