Gene  therapy is a promising treatment option for a number of diseases . The technique remains risky and is still under study to make sure that it will be safe and effective. 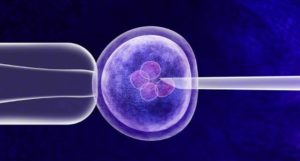 The ability to make site-specific modifications to the human genome has been an objective in medicine since the recognition of the gene as the basic unit of heredity. Thus, gene therapy is understood as the ability of genetic improvement through the correction of altered (mutated) genes or site-specific modifications that target therapeutic treatment.

This therapy became possible through the advances of genetics and bioengineering that enabled manipulating vectors for delivery of extra chromosomal material to target cells. One of the main focus of this technique is the optimization of delivery vehicles (vectors) that are mostly plasmids, nanostructured or viruses. The viruses are more often investigated due to their excellence of invading cells and inserting their genetic material.

Vivo studies in  somatic cell showed satisfactory results with approved protocols in clinical trials. These trials have been conducted in the United States, Europe, Australia and China. The approach is broad, with potential treatment of diseases caused by recessive gene disorders (cystic fibrosis, hemophilia, muscular dystrophy, and sickle cell anemia), acquired genetic diseases such as cancer, and certain viral infections, such as AIDS.

One of the most often used techniques consists of recombinant DNA technology, in which the gene of interest or healthy gene is inserted into a vector, which can be a plasmidial, nanostrutured, or viral; the latter is the most often used due to its efficiency in invading cells and introducing its genetic material.

In gene therapy, a normal gene is inserted into the genome to replace an abnormal gene responsible for causing a certain disease. Of the various challenges involved in the process, one of the most significant is the difficulty in releasing the gene into the stem cell. Thus, a molecular carrier called a “vector” is used to release the gene, which needs to be very specific, display efficiency in the release of one or more genes of the sizes necessary for clinical applications, not be recognized by the immune system, and be purified in large quantities and high concentrations so that it can be produced and made available on a large scale. Once the vector is inserted into the patient, it cannot induce allergic reactions or inflammatory process; it should increase the normal functions, correct deficiencies, or inhibit deleterious activities. Furthermore, it should be safe not only for the patient, but also for the environment and for the professionals who manipulate it. Finally, the vector should be capable to express the gene, in general, for the patient’s entire life

Although gene therapy is a promising treatment option for a number of diseases (including inherited disorders, some types of cancer, and certain viral infections), the technique remains risky and is still under study to make sure that it will be safe and effective.