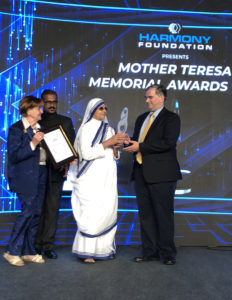 DAFOH was nominated for the 2016 Nobel Peace Prize and continues to focus on unethical organ harvesting. Noteworthy and admirable is DAFOH’s ability to initiate a petition to the United Nations High Commission for Human Rights, by gathering more than 2 million signatures worldwide within 3 years calling for an end to China’s forced organ harvesting of innocent people who are followers of Falun Gong—a peaceful exercise and meditation practice.

This year’s theme of the Mother Teresa Award is combating slavery. Dr. Trey in his opening address said “The award is a living memorial of the life and legacy of Mother Teresa. If slavery is defined as the exploitation of a human being to gain financial profit, then forced organ harvesting from living Falun Gong practitioners, is the ultimate form of slavery—it is the ultimate exploitation of the physical body”.

“How did our work start? — Back in 2006 I heard for the first time that Falun Gong practitioners in China were killed for the purpose to harvest their organs and to use them for profitable transplantation. Why Falun Gong? Practitioners of Falun Gong were peaceful, used their time to meditate, and they followed the principles of Truthfulness, Compassion and Tolerance. These are good, universal principles, and the practitioners who practice Falun Gong are good people. So when I heard about forced organ harvesting, my first reaction was to stop this transplant abuse. But I also felt intimidated: what can one person do, how can one doctor’s voice stop this abuse? This is how I came to realize that I would need to found an organization to amplify my voice, and that resulted in the foundation of DAFOH. Over the past 13 years many doctors joined, many things happened. The path of DAFOH shows: The voice of each single person matters and can change the world.”

Introduced in China in 1992 by Li Hongzhi, Falun Gong also called Falun Dafa, an ancient spiritual system of mind and body with notable health benefits reached 100 million people. Since Falun Gong’s growing popularity exceeded the members of the Communist Party of China, the then President saw it as a threat to his power. On July 20, 1999, he initiated a massive nation-wide persecution campaign which encompassed many different forms of cruelty and inhumanity, to eradicate Falun Gong.

Drawing a parallel with Diwali, celebrated recently, Dr Trey said “Diwali, the festival of lights is a triumph of light over darkness. A single candle can bring light into a dark room. In our case, our mission is like that candle, and we want to bring to light these crimes against humanity…informing people about forced organ harvesting, and we need even more light to reach more people”.

In a concluding Q&A session later, a young student moved by the organ trafficking issue in China asked what she could do to help. Dr. Trey said to a thunderous applause, “Take a simple souvenir postcard like those that you can buy in your city and send it to the President of China, with the text:

“Falun Gong is good. Stop forced organ harvesting from Falun Gong practitioners.”The Mother Teresa Memorial award for Social Justice is a validation of commendable work done by DAFOH to create awareness of this heinous crime against humanity and hopefully see an end soon.