Bengaluru: BR Life SSNMC Super Specialty Hospital has launched the Emergency department & Level 1 Trauma Centre recognized as the “Nodal Centre of GOLDEN HOUR” in the hospital at Rajarajeshwari Nagar. This is the only Emergency Nodal Center in Bengaluru South. The facility was inaugurated by Mr. T Suneel Kumar, IPS, Commissioner of Police, Bengaluru. 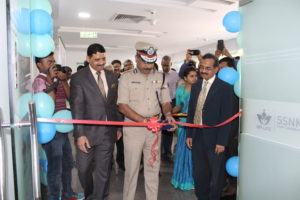 “GOLDEN HOUR” is a social initiative of BRAINS, providing timely interventions for Accidents & Medical Emergencies as a lifesaving mission. The objectives of “GOLDEN HOUR” is to act and react within the first hour of any emergency providing seamless care from the point of Emergency to the nearest appropriate Medical Centre with an assisted transportation.

BR Life SSNMC Super Specialty Hospital offers State of the art emergency care with high quality infrastructure, technology, coupled with clinical skills of excellence, process & protocols leading to hi-tech clinical offerings of immediate medical care. To address all kinds of emergency in the golden hour “Green channel admissions” has been launched, wherein emergency patients will be admitted and stabilized. After stabilization of the patient depending on the patient’s condition further clinical management will be planned. 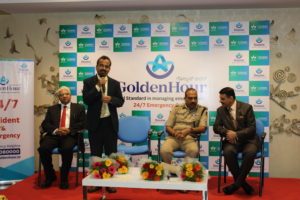 Addressing people during the inauguration Mr. T Suneel Kumar, IPS, Commissioner of Police said “Bangalore is expanding rapidly and the number vehicles are increasing to serve the needs. 82 lakh vehicles has been registered in the city which is leading to chaos on the road. The accident cases with head injuries are also on the rise.  As human beings we have to make efforts to save the sufferings instead of indulging ourselves in making videos of the events or clicking photographs. It can also create hindrance in the emergency services which can lead to the mortality”.

According to a report by National Crime Records Bureau, Ministry of Road Transport & Highway, Bengaluru is listed under the Top 10 metro cities with the highest number of ‘road crash death’. The report reveals that there is at least one death every four minutes due to road accidents in India. In most accident cases, victims suffer from poly-trauma — injuries to more than one part of the body. However, head injury is one of the major concerns which increases the mortality rate and chances of developing disabilities. Second, victims also suffer from excessive bleeding. It is, therefore, necessary to shift victims within the golden hour (the first hour of after medical emergency) to the hospital that is equipped with required medical devices to handle such emergencies to increase their chances of survival.

While explaining the concept and importance of golden hour, Dr. N K Venkataramana, Founder Chairman & Chief Neurosurgeon, BRAINS said, “Golden Hour is the first hour after any highly medical emergency or accident. A series of changes can happen during this time which is crucial for the patient and his chances of surviving the accident. Unfortunately, due to various reasons, accident victims do not get proper treatment in the first hour. This increases the mortality rate in our country. To reduce the chances of losing lives due to lack of proper medical attention, we are planning to come up with Golden Hour Clinics that will address emergency cases instantly and then lead them to the area Nodal centers. We are looking forward to developing more such centers across the city.”

Elaborating on the facilities available in the BR Life SSNMC Super Specialty Hospital Emergency Unit, Colonel Hemraj Singh Parmer, Group CEO, BR Life said, “Emergency units are a vital part in a hospital. At BR Life, we have world class expertise, technology, rehab & triage facilities to provide the finest service to the patients. However, it is important for people to act on time during emergencies. Our hospital will always thrive to increase the responsiveness among people and help people in saving lives.”

Keeping in mind the necessity of training people to handle emergency, an academy has been set up by BRAINS which train teachers, KSRTC and BMTC bus drivers, children from different schools, scouts and guides.